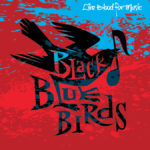 The lyrics and music on Like Blood For Music are original compositions by Daniel Fiskum. The music is simultaneously melodic and dark, and the lyrics evoke sexual co-dependency and hopelessness, chaos and distortion, and the fight for redemption.

2. Strange Attractor – In physics there is a particle known as a “strange attractor.” It cannot be seen, but it becomes known by the effect it has on nearby particles, pulling them out of their orbits. In love relationships there is often a strange attractor, someone who pulls one’s lover out of the orbit and into a new relationship. That person might be unknown, but their influence is felt.

4. Battle Hammer – The great recession of 2008 coincided with one of the lowest points of many of our lives. People lost their jobs, their houses and their marriages. Most people barely hung on and a many did not. We were road kill, but we stayed in the fight and fought back. This song is an anthem to courage.

5. House of No More Dreams – The protagonist in this song is looking for escape and for redemption. For many of us, that only comes after a fight in which everything is at risk.

6. Hole in the Day – Many people experience depression during their lives, either short-term or long term. In my opinion, the worst thing about depression isn’t the sadness so much as it is the feelings of doubt and hopelessness. This song is my attempt to express these feelings. There is a hole in the day, where doubt slips in, where hope slips away.

7. Soul of Wood – Sometimes a desire for something illicit possesses you from within the core of your being. If that core is flammable, there is little hope.

8. Don’t Fall in Love – This song is about prostitution, told from the perspective of the prostitute. We all live double lives and many of us prostitute ourselves in one way or another. There is a “real me” that hides beneath the surface. Compassion is necessary for all, including ourselves.

9. My Eyes Were Closed – This song is about gay teen suicide, something that is an epidemic where I live, the western suburbs of Minneapolis. It is written from the perspective of a surviving parent who could not see the problems his child was experiencing, a parent whose eyes were closed.

10. Legendary – This is a love song, but it is not about blue skies, flowers and sunshine. It is about dying on the street for love. It is about losing battles and continuing to fight to win the war. It is about being beaten down and getting up again, and living and dying fearlessly for love.